Moving Mountains Nepal is involved in several programs focusing on utilities and projects in the villages of Bupsa and Bumburi in the Khumbu region of Nepal, about 120km from Mt. Everest. Our long-term vision is to help this region develop into a sustainable community that provides high levels of education, health, social welfare, and business opportunities.

Twenty years ago, the villages of Bupsa and Bumburi were almost empty. There was little development and almost no educational or employment opportunities. Today, after years of work and development these villages are brimming with life. They have access to electricity from the hydroelectric dam, to clean water, eco-friendly cooking stoves, and, as a result, to better employment and education. We are delighted to see that the villages now are thriving.

Facilitating a bright and prosperous future for the village and it's surrounding area.

In 2008 we installed eco-friendly cooking stoves into all of the existing homes in the village of Bumburi.

Moving Mountains installed hydro-electric plants in 2005 that have completely turned around the fortunes of the village.

New electric lights were recently installed with donations of 36,000 Nepalese Rupees made on the birthday of Buddha.

Preserving and renovating monasteries, ensuring they remain centres of Buddhist ceremonies in the region.

Impacts of Utilities and Projects: Improved Health and Well Being

Over the years that Moving Mountains Nepal has worked with the villages in the Khumbu Region, we’ve noticed that our projects have a multitude of benefits. For example, when we constructed the hydroelectric dam, we knew that the immediate impact would be access to electricity. When we installed eco-friendly stoves, we knew the immediate impact would be more efficient use of firewood.

Yet we have discovered another impact of our work on utilities and projects in Nepal: the overall improvement of the health and well-being of the community. In the past, these communities were at a high risk of water-borne illnesses due to their inefficient and unsafe water storage facilities. But since Moving Mountains has installed new water storage systems with an updated piping system, we’ve noticed a marked increase in the health of children and parents.

Our eco-friendly stove initiative has also helped to improve health and well-being throughout the community. Prior to this project, families used inefficient wood burning stoves that released far too much smoke. The smoke would be trapped in the houses, causing problems in the lungs of the women and children.

Now that these villages have eco-friendly stoves, they are able to use far less firewood to cook their meals. The stoves remove the smoke from the home, leaving clear air behind. The overall impact of these stoves has been a marked improvement in the health of women and children in the community.

When adults and children have better health, they are able to take advantage of the opportunities available to them within their community.

Since Moving Mountains Nepal began working on utilities and projects, we’ve noticed attendance to the primary schools in Bupsa and Bumburi. In the past, children were often sick and couldn’t attend school. Or their parents were pulling them out of school and taking them to Kathmandu to work and make money.

Today, in part because of our improvements to the utilities in these villages, we are seeing more children attending primary school and going on to attend secondary school. Now that families have access to electricity, safe cooking stoves, and clean water, children are sick less often and as a result, don’t fall behind in school.

Children with access to education are far more likely to find success, economic growth, and build safe and secure lives for themselves, their families, and their communities. Today in Bupsa and Bumburi, we are beginning to see the long-term effects of our utilities and infrastructure projects here in the Himalayas. 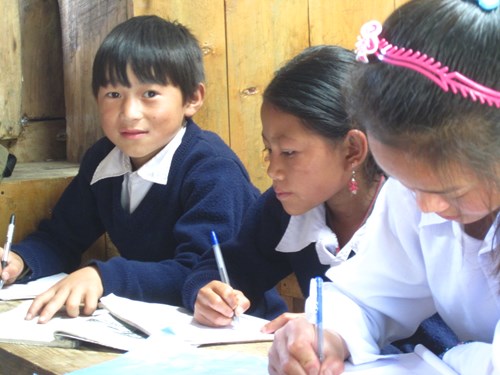 Impact of Infrastructure on Business

The final impact we’ve found of our work on the utilities and other projects in the Himalayas is the positive growth of businesses in these villages. Having worked with the local people to help them take control of their own development, we’ve seen a rise in the number of small initiatives, businesses, and sustainable tourism projects.

Overall, the villages are happy with the positive economic growth they’ve seen as a result of these utility projects and other programs Moving Mountains Nepal has helped them to achieve. 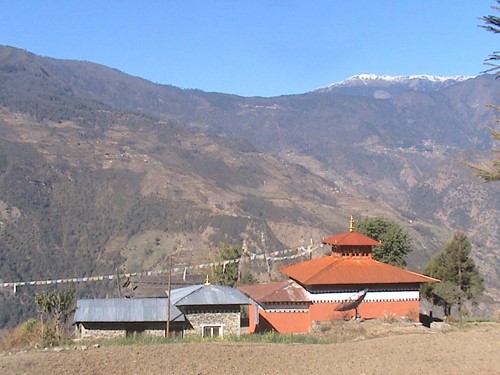 For many years, the people of Bupsa and Bumburi lived under a threat of violence from Maoist rebels. During this time, religious and cultural sites such as the monasteries in these villages were neglected or even torn down. Over time, the monasteries fell into states of disrepair, and the lamas, or knowledgeable monks and teachers, moved elsewhere.

In Nepal, Buddhism is the glue that holds their society together. Beyond simply attending ceremonies, monasteries and other Buddhist religious sites are objects of pride and joy for a community. The loss of their monasteries was especially heartbreaking for the people of Bupsa and Bumburi.

At the request of the local populations, Moving Mountains Nepal began working, first with Bupsa and later with Bumburi, to renovate and repair the local monasteries. We helped to fundraise for supplies, the cost of rebuilding, and worked to find a Lama to visit the villages and bless the monasteries after the renovations were complete.

In Bupsa, the site of our first monastery renovation, the monastery was 350 years old and an object of deep pride for the community. But it had fully into disrepair. Moving Mountains renovated the monastery in Bupsa from 2002 to 2005. Since then, we’ve helped the community to open a monk school by providing a salary for a learned monk to live in the village and teach children and teenagers this ancient tradition.

In Bumburi, our work on the monastery began in 2006. This monastery is one of the oldest and most important in the region. It holds a sacred relic, a magic coat that is believed to have transported a Lama to Thyangboche, the largest monastery in the Khumbu region.

During the Maoist troubles, the people of Bumburi removed the sacred relic from their monastery and buried it in the ground to prevent it from being stolen. After this, the monastery fell into disuse and disrepair.

Today, Moving Mountains Nepal has supported the complete renovation of the monastery, and the restoration of the sacred relic. People travel from far and wide to visit this monastery and see the relic for themselves. Once again, this religious site is a place of pride and joy for the local community.

Our work on these monasteries is not finished. We hope, with the support of our generous donors and volunteers, to build a second monk school for the children of Bumburi to attend, as well as continuing to update the structures and build new outbuildings as needed. 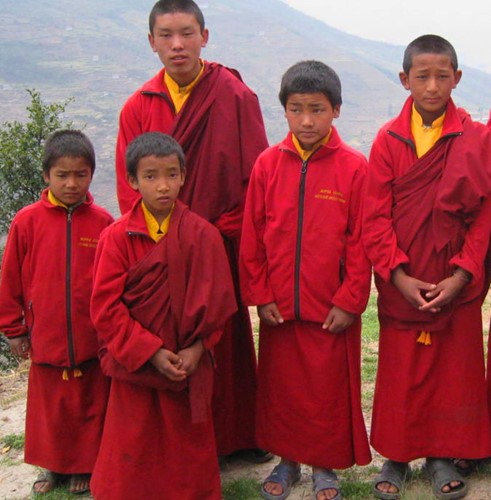